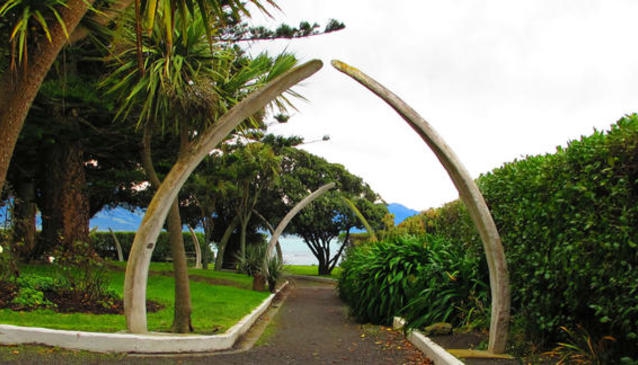 Gardens and Parks Points of Interest

Garden of Memories is situated opposite Kaikoura Memorial Centre. The small garden features a number of whalebone arches and is a tribute to those that sacrificed their lives during both World Wars.

The garden overlooks and provides access to the beach below.

Early in 1921 a memorial obelisk dedicated to the memory of Kaikoura servicemen killed in 1914 - 1918 war unveiled. Situated on the bleak point surrounded by a few small Norfolk Pines, the area was sandy and stony, inhospitable to all but some native grasses.

A local woman called Lydia Washington dedicated her time to beautify the area.The Taupata hedge was first planted on the seafront to protect the flowerbeds and shrubs that were to follow. Each plot commemorated a battle, the Somme, Gallipoli, Jutland.

Lydia Washington was given some whale bones which she had erected in the form of arches along a wide path.

In 1939 the garden gates were build as a tribute to this special lady, who had done so much in memory of the fallen. For her dedication in establishing the Garden of Memories, the Return Services Association made her a life member and presented her with gold R.S. A badge. She become known as The Grand Old Lady and could be seen tending the gardens until she passed away on 18 October 1946 of the age of 82.

There is convenient and free parking just outside the gates.