From arduous treks that reveal the mighty outline of cloud-topped Aoraki itself to casual walks through the famous Hooker Valley, this selection of the best Mount Cook walks comes complete with breathtaking moraine landscapes and overhanging glaciers aplenty.  Don't forget the sturdy boots.

Park up at the shelter in Mount Cook Village and delve into some of the last remaining swathes of silver beech forest that dress the valley bottoms around the mighty peak of Aoraki.  The lightly-slanting track known as the Governors Bush Walk will take you through the thick woods, where fantails flit between the canopies and blooms of verdant ferns lean over the rocky path, all before emerging out onto some breathtaking, if low-altitude, lookout points over the Mount Cook valley.  Picnic points and toilets are available at the start of the track, and the whole journey takes just one hour from start to finish. 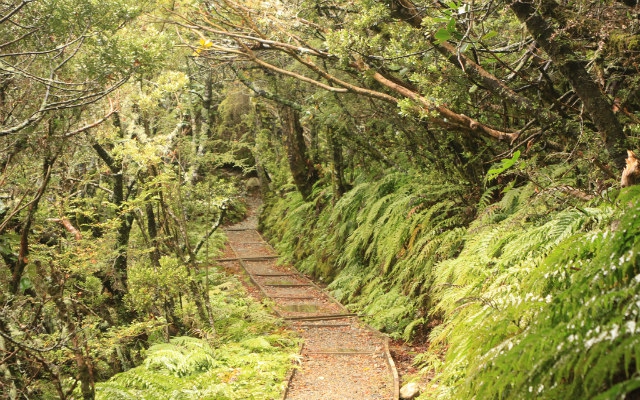 The vast, open stretches of the great Tasman Valley are the backdrop for this one-hour loop that weaves right beneath the icy crevasses of New Zealand's largest glacier.  The hike starts at the Blue Lakes Car Park, and begins by creeping up and down over the moorland hills that encircle Mount Cook.  Soon, the terrain becomes more rocky and rugged, and the chiseled peaks of the Southern Alps loom like serrated massifs of the horizon.  The piece de resistance has to be the final views of Tasman Lake and its surface icebergs, not to mention the so-called Blue Ponds, which now glow a distinct green color, contrary to their name. 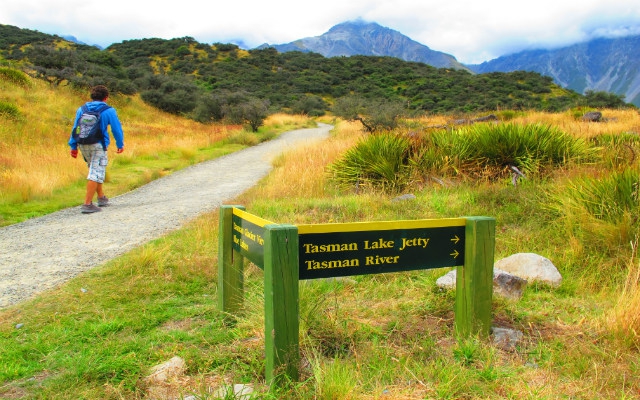 Sticking largely to the valley bottom, this short and easy track offers great views of the craggy summits of Mount Sefton, Mount Sealy, and of course, Mount Cook itself, which looms large on the horizon just to the north for the inward trip.  You pick the route up at the Hooker Valley campsite, and join a gravel path as it delves into the colossal gap of the Main Divide.  You'll get great sightings of the Mueller Glacier ice fields, while the walk turns around at the mirror-like tarns close to Mueller Lake, have the cameras at the ready for a perfect photo op of Cook peak reflected in the water.  Kea Point Track is relatively exposed, so it can get blustery in bad weather. 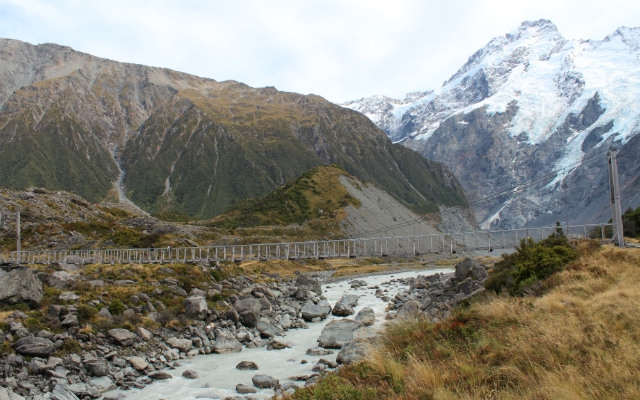 A more challenging option amongst these top Mount Cook walks that goes into the higher reaches of the Mount Cook valley, the Red Tarns Track weaves and winds up a series of mountain steps that are carved directly into the hillsides.  You start right at the base of the valley floor, and slowly rise past the green bush and into the more rugged alpine terrain.  Finally, the track emerges onto a small plateau where the eponymous Red Tarns sit in the shadow of ice-caked Mount Cook.  These are named for the distinctly-colored weeds that grow in the water, and there are some awesome lookout points for sweeping panoramas of the highest Southern Alps nearby. 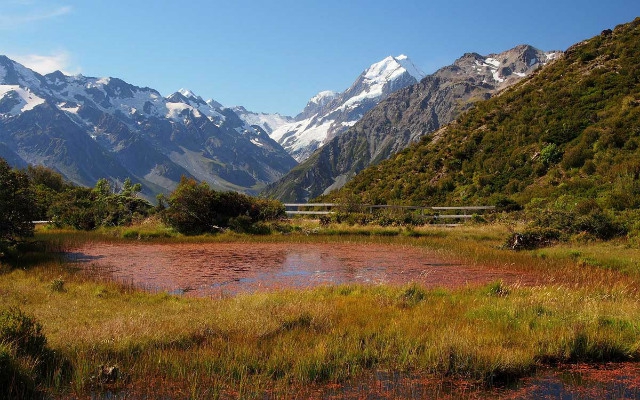 As the name suggests, this popular three-hour trek starts at the Hooker Valley campsite.  From there it follows an easy-going gravel path up to the lookouts above murky Mueller Lake.  After that, the going gets a little tougher, as the Hooker Valley Track begins to clamber over the boulders and stones of the upper alpine highlands.  Eventually, the path opens to reveal stunning panoramas of the Main Divide, with Mount Cook soaring opposite and a series of glaciers discernable overhead.  Hooker Valley Track is accessible but exposed, making it unsuitable for walking in bad weather.  Read more in our Hooker Valley Walk article. 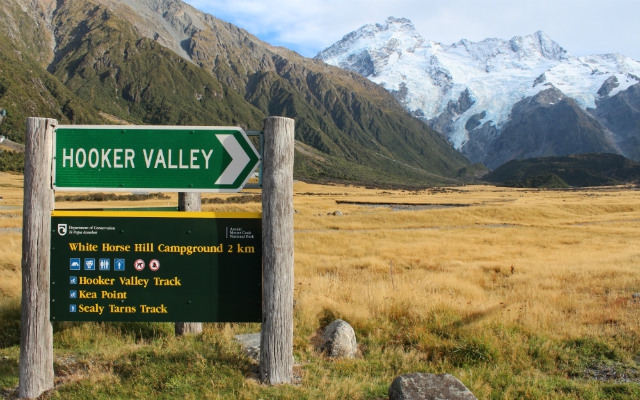 Although the Ball Shelter Route demands just four hours to complete from start to finish, it's also possible to take this one slowly and opt to bed down in the high-altitude cabin at the midway point.  You'll need to let the folks at the Mount Cook visitor center know beforehand if you do intend to do that, and prepare for a night of sub-zero temperatures in the tiny little hut atop the treeline.  Alternatively, you can do the trek in just one day, enjoying as you ramble from the Blue Lakes parking lot and over the rugged moraine that cascades down off the Tasman Glacier.  The turning point is where the hut itself sits perched; lonely on its own little nest just around the corner from snow-mantled Aoraki peak. 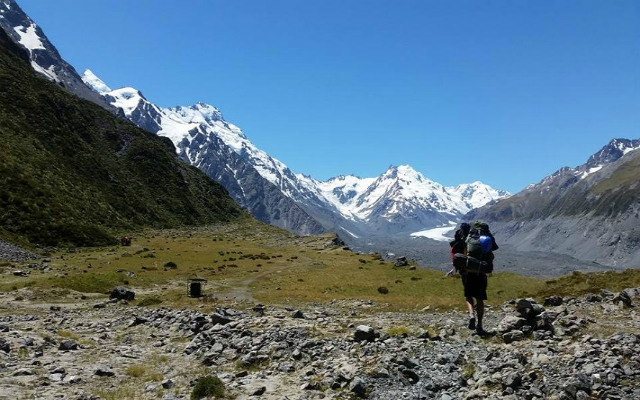 The iconic Sealy Tarns Track (unquestionably one of the most popular Mount Cook walks on the menu for serious hikers) might only clock up just under six kilometers in total length, but it can take up to five hours to complete thanks to the hefty gradients that dominate throughout.  The arduous trek takes visitors high into the mountains from the base point along Hooker Valley Road.

You start by navigating a patchwork of moors and windswept alpine meadows, before turning towards Mount Sefton as the route gets rockier.  Then it all gets noticeably more challenging, with steep ascents into the Sealy Range.  The track keeps its high gradient as it passes gorse blooms and outcrops, eventually leading to awesome lookouts above Mueller Lake and Hooker Valley.  There are also the famous tarns themselves, which shimmer and shine, and beautifully reflect the profile of Mount Cook above. 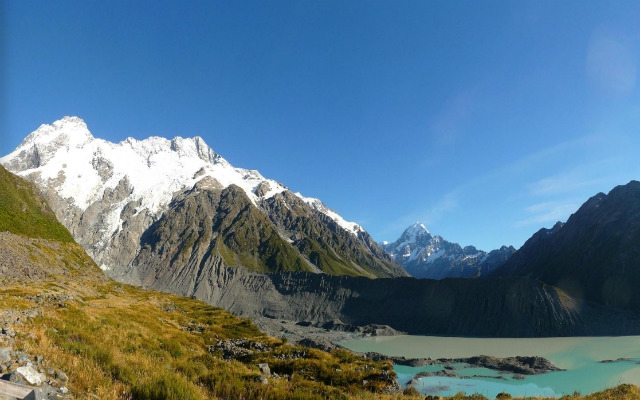