Find the Best Deals in Christchurch

What's On in Christchurch

If you are a business in Christchurch and have an event to promote you can do it on My Guide at no cost.

Submit an Event for FREE

New Zealand’s scenery was what the clichéd adjective was invented for: The mountains really are majestic, the lakes really are crystal clear, and the locals really are some of the friendliest in the world, (it was even voted the world’s friendliest country by Forbes recently). The drive from the South Island’s east to west coast will make your jaw drop, take your breath away, and cram your camera’s memory card to the brim.

Beginning in Christchurch and ending in Greymouth, the 249km journey is one of New Zealand’s most spectacular routes.

Surrounded by hills and the Pacific Ocean, Christchurch is a cultural city with a vibrant arts scene. It is often described as New Zealand’s most ‘English’ city, with its picturesque architecture and winding river. After a couple of days drinking perfectly-roasted coffee and wandering around the numerous museums and galleries, get yourself some transport, a tent, a gas stove, and hit the road, before you get too comfy in this homey city.

New Zealand is very much a DIY sort of place, and hiring your own vehicle gives you the freedom to create your own path through this fascinating land. From stylish graffitied mini-campers, to monstrous 6-berth motor homes, complete with bathroom and flat screen TV, there is something for every budget, comfort level and taste.

To begin your journey, start heading along Highway 73. It’s not hard to get off the beaten track in New Zealand, within an hour of leaving Christchurch you’re already in the wilderness. The drive through the Canterbury Plains is your first introduction to the country’s outstanding natural beauty. The vast plains will dwarf you as you trundle along their snaking roads up into the foothills of the Southern Alps. 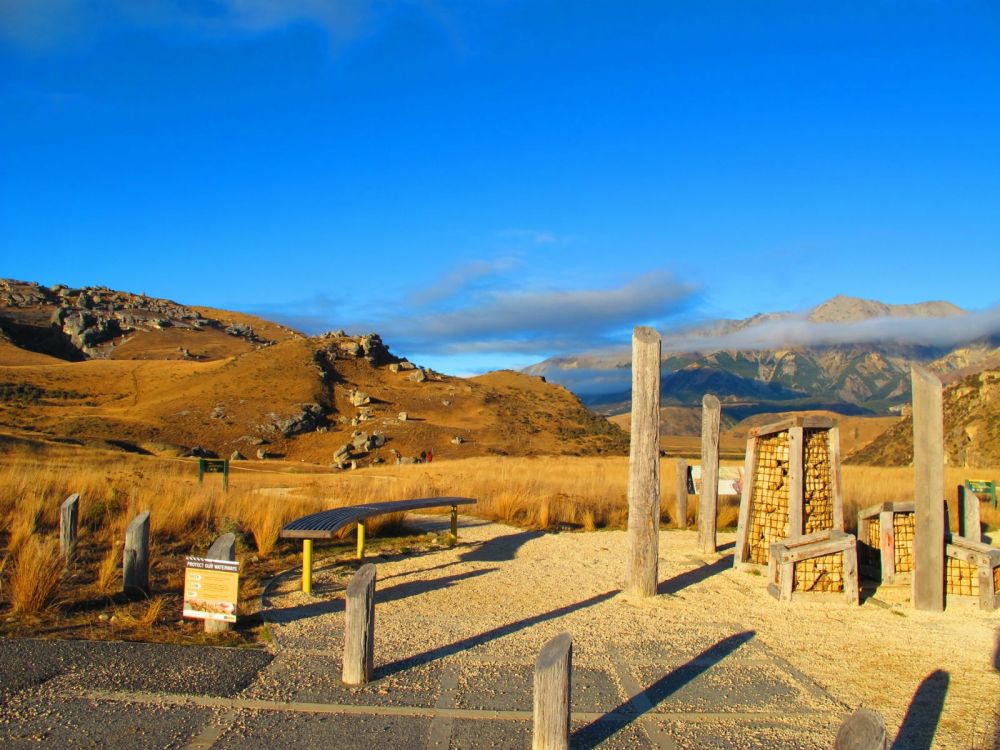 About an hour from Christchurch lies Castle Hill. This fairly barren looking place is home to a large limestone boulder formation, thought to resemble an old castle. These days it is a top bouldering destination. If you don’t know what bouldering is, it’s time to brush up on your knowledge of all things climbing-related, as Arthur’s Pass is a climbing mecca. To put it simply, bouldering is climbing, equipment-free, up a rock-face or boulder.

If you fancy trying it, it’s a good idea to have a crash mat handy; these can be hired from the General Store in Springfield, the last town before you head up the hill. If that sounds a little too terrifying, you can always just hang out by the boulders and soak up the spirituality of the place. Forget Stonehenge, The Dalai Lama named this place the “Spiritual Centre of the Universe” in 2002.

A little further along Highway 73, you will come to Cave Stream Scenic Reserve. Another of New Zealand’s natural wonders, Cave Stream is a remarkable 594 metre-long cave. You can wander through this fascinating limestone phenomenon at your leisure. At the end of the cave there is a deep pool and a 3-metre high waterfall. The exit is a little precarious, with a ladder leading up over the top of the waterfall. Getting out involves scaling the ladder and then crawling along the overhang ledge to the exit…but you can’t really expect anything less in the adventure capital of the world. 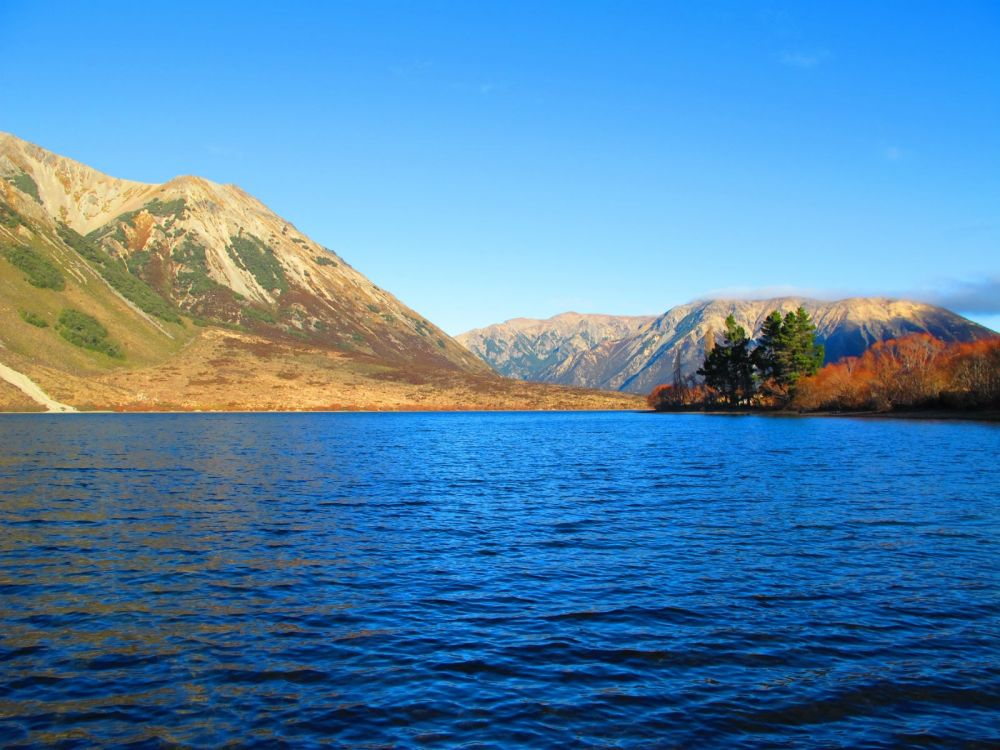 You should only need an hour at Cave Stream, so it’s a good place to break the journey before continuing west along the Highway. The next must-stop on your itinerary is Lake Pearson. This serene spot is perfect for a relaxing lunch or some semi-wild camping. The 195-hectare lake is a great fishing spot, and those who are keen can cast off from ashore. There are Rainbow Trout, Brown Trout and Mackinaw on offer.

It’s a great place to spend the night, and there is a basic campsite, with toilet facilities and space for 20 tents. Lake Pearson gives you the chance to have a real wilderness experience. Spend the day fishing for your dinner then cook it on a homemade BBQ, before feasting on your catch and watching the sunset over the lake.

Arthur’s Pass National Park marks your journey’s halfway point, and is an outdoor-lover’s paradise. The 1000-km2 park is an environment of extreme contrasts. Where else on Earth could you trek through thick rainforest and in the morning and then strap on some skis and explore the snowy peaks in the afternoon?

The park epitomises the incredible geographical diversity that New Zealand has to offer. The main activity on offer is walking and trekking; this is the best way to really appreciate your surroundings here. There is a trail to suit everyone, from a 10-minute waterfall walk to overnight treks through remote valleys and high alpine passes. It’s also possible to mountain bike in the park.

A trip to Devil’s Punchbowl Falls makes for an interesting hour’s walk, through mountain beech forest. The 131-metre falls are a spectacular sight and the walk has excellent views of Arthur’s Pass. There are basic campsites dotted around the park, or you can bed down at one of the motels in Arthur’s Pass Village, a tiny settlement 5km from the park. 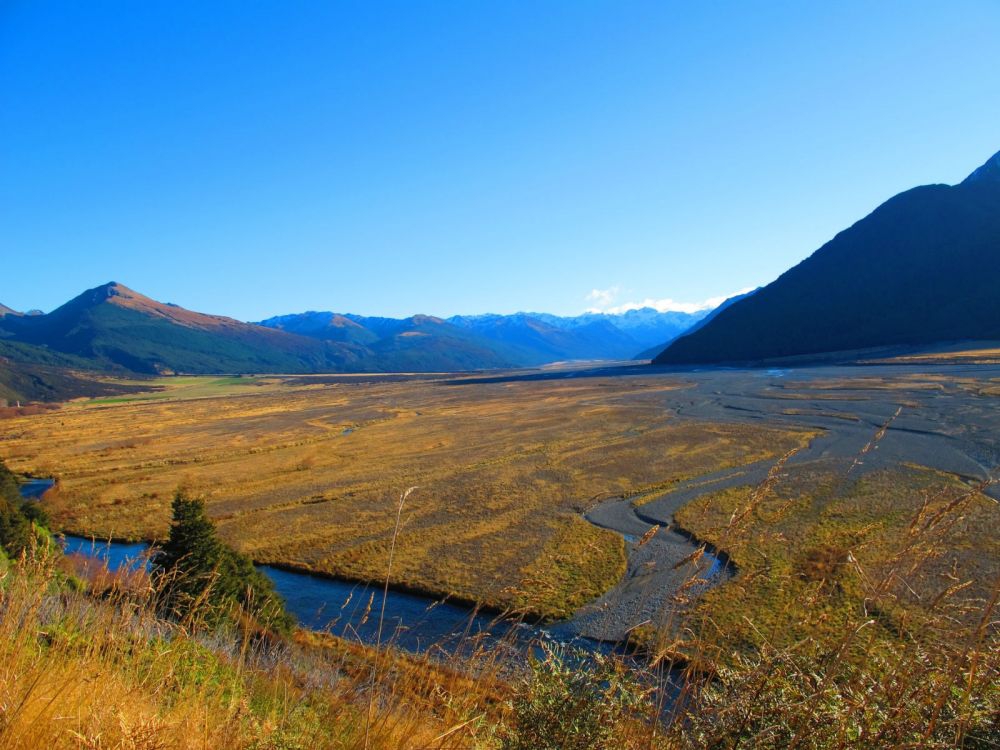 Seven kilometres along from the national park you will find some major feats of engineering excellence. The Otira Viaduct is an elevated road completed in 1999 that replaced the Devil’s Staircase, aptly named due to its reputation of being a dangerous road prone to avalanches. It is now a popular look out point.

Continuing along Highway 73, prepare to be plunged even deeper into the mystical wonder of this beautiful country. You’ll pass crashing surf, wild forests, old gold-mining towns and giant glaciers, until you reach your final destination of Greymouth, the west coast’s biggest town, although ‘big’ is, of course, by New Zealand standards: The population is only 10,000. In Greymouth you can visit a reconstructed gold-mining settlement, go rafting, dolphin-watching or quad biking.

If driving’s not your thing or you just want to experience one of the world’s most picturesque rail journeys, consider taking the TranzAlpine train from Christchurch to Greymouth. The journey is four and a half hours of some of the world’s most stunning scenery, which can be experienced through the train’s unique viewing carriage. 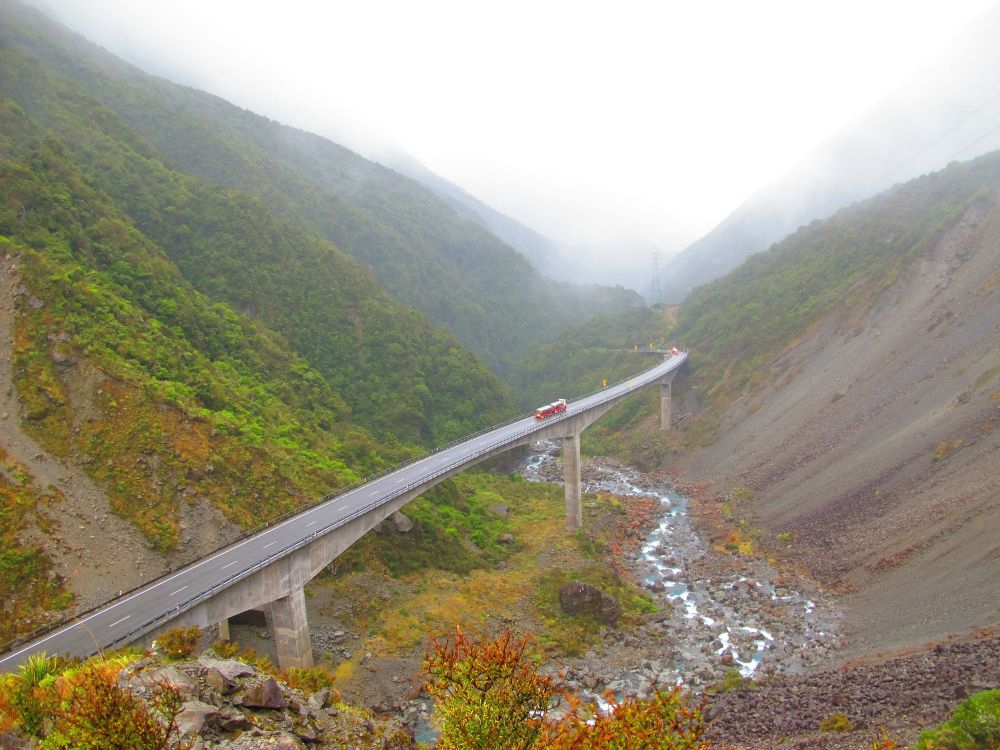 Best Things To Do with Kids in Christchurch

Best Things To Do with Kids in Christchurch

Pump up the adrenalin to maximum effect at Adrenalin Forest, Christchurch. Dozens of outdoor challenges for all ages and abilities, in a picturesque, sustainable setting....

Located next to Christchurch Airport, the International Antarctic Centre offers a fun and interactive experience of Antarctica.............

Spend a day in the outdoors cycling, walking, or running. Enjoy the peace and listen to native birdcall..........

Free Things To Do In Christchurch

Our guide to Free Things To Do In Christchurch by our Christchurch local expert - Christchurch is a city on the ascendency again after the terrible damage caused by the 2011 Earthquake. The central business district and all the major attractions are back open for business. But for those budget conscious visitors to the city, what is there to see and do without impacting the budget?

Our guide to Top 10 Canterbury by our Christchurch local expert - With so much to see and do in Christchurch and the Canterbury region, we've put together our 'Top 10 Things To Do In Canterbury' list to offer some inspiration when planning your trip.

Spend a day in the outdoors cycling, walking, or running. Enjoy the peace and listen to native birdcall..........

700 square kilometres of awesome glaciers and snow-capped mountains, including 19 of the country's highest 20. Aoraki/Mount Cook is the crowning jewel, a must-see for any...

A few minutes' drive from Kaikoura town centre brings you up close to a seal colony. Park your car and view the seals in their natural habitat, with a backdrop of the Kai...

Midway along highway 73, Castle Hill got its name due to the large grey boulders of limestone resembling the ruins of an old castle. Wih boulders reaching over 50 metres ...

A spectacular fall of 131 metres, accessed from the Devils Punchbowl trail. The one hour return walk includes footbridges, forest, impressive views of Arthur's Pass and a...

High-speed jet boating adventures through the Rakaia Gorge, an hour out of Christchurch. Experience 360 degree spins and breakneck speeds along the narrow and shallow cha...

Tick your ultimate New Zealand bucket list activity off and swim in the wild with the endangered Hector’s dolphins with Black Cat Cruises......

Punting On The Avon

Punting on the Avon is an iconic experience in Christchurch. From the comfort of cushioned seats in your 'punt', enjoy a relaxing tour along the River Avon to see histor...

High-speed jet boating adventures through the Rakaia Gorge, an hour out of Christchurch. Experience 360 degree spins and breakneck speeds along the narrow and shallow cha...

Tick your ultimate New Zealand bucket list activity off and swim in the wild with the endangered Hector’s dolphins with Black Cat Cruises......

Incredible boat journeys beside the mighty Tasman Glacier. One of only three tours of its kind in the world, you'll sail across the terminal lake and capture some amazing...

Rafting adventure specialists offering rides for varying abilities. Situated in the Southern Alps, covering some of the wildest wilderness in the country. Satisfaction gu...

Canterbury Museum and its collections have been enjoyed by visitors from across the world for over 130 years..........

Punting On The Avon

Punting on the Avon is an iconic experience in Christchurch. From the comfort of cushioned seats in your 'punt', enjoy a relaxing tour along the River Avon to see histor...

Find out more about the devastating 2011 Christchurch earthquake from the people it affected most.............

Located next to Christchurch Airport, the International Antarctic Centre offers a fun and interactive experience of Antarctica.............

Part of the My Guide Network